I have to admit that I am a big fan of white chocolate.  I know it's technically not chocolate but I love the smooth creamy flavor.  Especially mixed with nuts.  When I lived in New York City, there was a wonderful little candy shop in the West Village on Christopher Street that sold bars of white chocolate studded with cashews.  I would make a special trip there every couple of weeks to indulge my sweet tooth.  Then Mrs. Field's came out with the White Chocolate Macadamia Nut Cookie and I was hooked.
When I started baking cupcakes I knew this was a combination I had to have in a cupcake.  I think I have found the perfect combination of cupcake and buttercream.  I hope you enjoy them as much as I do.  It's in my top ten of favorite cupcakes.  I have to eat one right out of the oven and then one right after I frost them.  I have to use all my will power not to eat the entire batch right then and there. 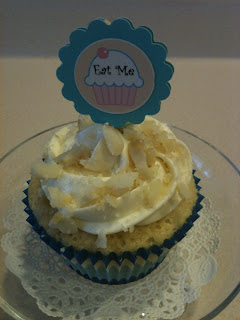 Scoop batter into prepared pan.  Bake in preheated oven for 20 to 24 minutes or until golden brown and tops of cupcakes spring back when lightly touched.  Let cool in pan on rack for 10 minutes.  Remove from pan and let cool completely on rack.  Top cupcakes with White Chocolate Buttercream and garnish with chopped Macadamia Nuts. 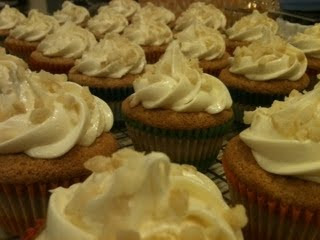 Set aside and allow to cool for approximately 20 minutes. Make sure chocolate is cool to the touch, you don’t want it to melt your butter.  After chocolate has cooled, add it to the creamed butter and mix on low speed until just combined. Scrape sides of bowl then …

On low speed of a hand or stand mixer, mix until fully incorporated; no confectioners' sugar should be visible. Mixture should be smooth and fluffy.

Do not refrigerate; use immediately or store in airtight container for up to 2 days. 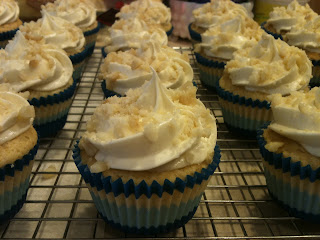 Maple French Toast and Bacon Cupcakes - Breakfast in a Cupcake! 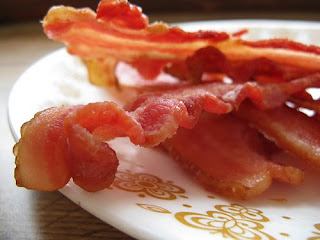 What is it with men and bacon?  As soon as word got around work that I was baking cupcakes weekly and bringing them to work, one of the guys in the office began begging me to make a bacon cupcake.  And though I had been reading about and seeing pictures of bacon cupcakes all over cyberspace this flavor was not on the top of my list. But he and another male co-worker kept bugging me and I kept resisting.

This went on for almost six months until finally he announced that he had given his two week notice and all he wanted for a going away present was some Bacon Cupcakes.  What was I to do but make them for him.  Back to the web to find a recipe.  I finally decided on a recipe from the Food Network Magazine that won their Maple Syrup secret ingredient challenge.  I have to admit they were really good.  It was breakfast in a cupcake.  He was very happy to finally have his bacon cupcake. 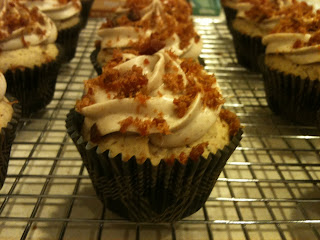 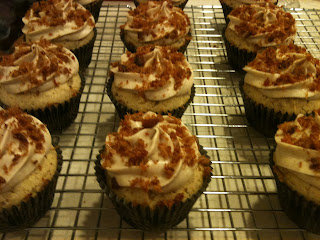 Directions for Cupcakes:  Preheat the oven to 325 degrees. Place paper liners in a 12-cup muffin tin. Prepare the cupcakes: Combine the flours, pudding mix, baking powder, potato starch, cinnamon, nutmeg and salt in a bowl with a whisk.

In a separate bowl, cream the butter and sugars with a mixer on low speed until combined, 6 to 8 minutes. Gradually mix in the vanilla and egg whites. Scrape down the sides of the bowl; continue mixing until light and fluffy. Add the flour mixture in 3 batches, alternating with the maple syrup and half-and-half, mixing after each addition and ending with flour. Mix until the ingredients are just combined; do not overmix. Fold in the bacon.

Pour the batter into the prepared muffin tin, filling each cup about three-quarters of the way. Bake until a toothpick inserted in the center comes out clean, about 40 minutes. Cool completely.

Directions for Frosting:  Beat the cream cheese and butter with a mixer on medium speed until creamy. Add the confectioners' sugar, maple syrup and cinnamon; beat until combined. Spread on the cooled cupcakes; top with chopped bacon, if desired. 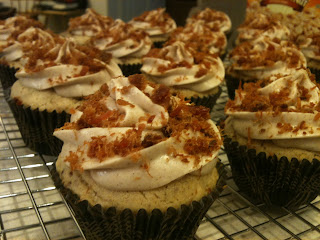 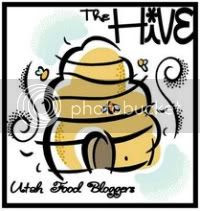