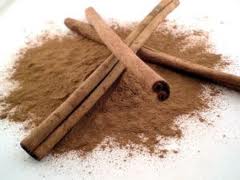 Cinnamon is by far my favorite spice. As a child I adored Cinnamon Toast and my Mom made sure there was always a shaker of Cinnamon Sugar in the cupboard to enjoy this treat. I love baking cupcakes for friends. I love to make them in their favorite flavor(s).
During my recent participation in a production of "My Fair Lady" I made a new best friend for life. Wanting to make him some cupcakes, I asked him what his favorite flavor was. He said anything with Cinnamon. Cinnamon Buns being his favorite sweet treat of all time. This started my quest for the ultimate Cinnamon Cupcake. This Cinnamon Streusel Cupcake with Cinnamon Cream Cheese Frosting fit the bill. Every time I bake them now I know he will be one happy camper.

In fact, I am renaming these cupcakes in his honor.  From now on my Cinnamon Streusel Cupcake with Cinnamon Cream Cheese Frosting will be know as "The Leelee". 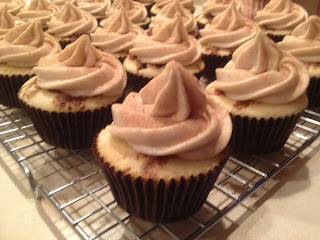 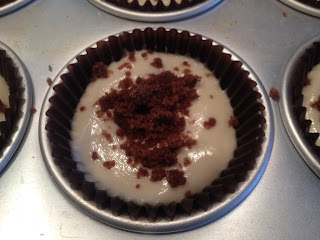 Sift together the flour and baking powder into a medium bowl and set aside.
In a large mixing bowl mix the sugar and butter on medium to high speed for 30 seconds, or until mixture is light yellow and well blended. Add the eggs to the mixture one at a time, beating on medium for 30 seconds after each egg. Add the vanilla and mix until well combined. Add the sifted flour mixture and the milk alternately, mixing at low speed until both are fully incorporated. Do not over-mix.

For the cinnamon streusel, in a small bowl mix the brown sugar, cinnamon and maple syrup until well combined.

Fill the cupcake liners 1/3 full with cake batter. Add a heaping teaspoon of the cinnamon streusel to each one, then spoon on batter until cups are 2/3 full. (You should have some streusel left for spinkling on top of cupcakes.)

Bake in a preheated oven at 350 degrees F for about 20 minutes, or until a toothpick inserted into the center comes out clean. Set the baked cupcakes on a rack to cool. 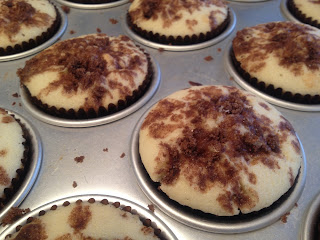 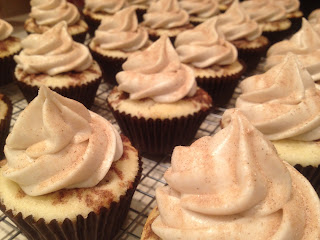 In a mixer fitted with the paddle attachment whip the butter, cream cheese and shortening for 5 minutes. Set a timer, do not under beat. Gradually add the powdered sugar to the mixture and scrape down the bowl as needed. Add the vanilla, cinnamon and salt and mix until combined. Pipe frosting onto cupcakes using a decorative tip. Top the cupcakes by sprinkling a little of the leftover streusel mixture, cinnamon sugar or some brown sugar on top.

The frosting can be used right away or stored in the refrigerator up to a week. 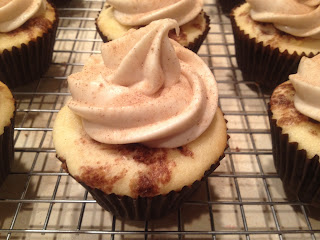